Australia
There isn’t a better way to experience the land down under than on a cruise ship! While onboard you can encounter all the magic and wonder these islands have to offer. Where else can you see snowcapped mountains in New Zealand and Australia’s desert outback in the same trip! You’ll travel by incredible landscapes, world class beaches, see koalas and kangaroos and have the opportunity to snorkel over the Great Barrier Reef, one of the seven natural wonders of the world! 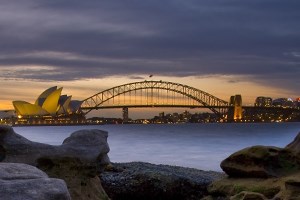 Australia is home to some rare, fabulous natural wonders. From Queensland’s famous Great Barrier Reef, which embodies the only living piece of Earth noticeable from space, to the spectacular, sacred Uluru, or Ayers Rock, a massive sandstone monolith formed over 550 million years ago.

Great Barrier Reef is one of the most visited tourist spots in Australia. The Reef is positioned close to the northern coast of Queensland and stretches over 1200 miles. The Great Barrier Reef with its awe inspiring coral beach islands offers a once in a lifetime experience for nature lovers.

A World Heritage site, Ayers Rock also goes by the Aboriginal name of Uluru. Aboriginal tribes were living in the area 10,000 years ago. White men did not come onto the scene until the 1870s, when William Gosse named it for Henry Ayers, the then-South Australia Chief Secretary.

Visitors can climb Uluru – Ayers Rock as well as explore the base of it. It’s best to observe the rock during sunrise and sunset, when its terracotta hue morphs into a violet/blue tinge.
Whether you choose to explore the country’s outback wilderness, surf along its incredibly diverse coastlines, snorkel the Great Barrier Reef, sail in the Whitsundays, you will certainly find the vacation of a lifetime! 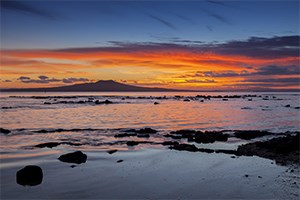 Visitors to Auckland find incredible natural wonders on the doorstep of a world class city. You can hike through a rainforest by day and discover exciting nightlight at night. Kayak to a volcano in the morning and visit wineries in the afternoon. Auckland is home to the largest Polynesian population of any city in the world. Known as the “City of Sails” from its large sailing popularity, it is home to the next Americas Cup race too.

New Zealand's Auckland region has 48 volcanic cones, which provide spectacular panoramic views of the city and harbor. Rangitoto Island, just a 25-minute ferry ride from downtown Auckland, is the region's most iconic volcano and a favorite day trip destination for visitors, hikers and bird watchers. Auckland’s Hauraki Gulf Marine Park encompasses an incredible 1.2 million acers of coast, sea and islands – and there are so many ways to explore it.

Waiheke Island is a haven of beautiful vineyards, olive groves, farm land and golden beaches - and only a 35-minute ferry ride away from downtown Auckland. Sip on award-winning wines at some of the 30 boutique vineyards and wineries, enjoy fine dining and pick up superb local artwork. The Auckland Zoo has the largest collection of exotic and native animals in New Zealand. Stoll along the Glenfern Trail. This lush forest has a swing bridge and a canopy of over 600-year-old trees. Or get a panoramic city view from the top of the Sky tower.

Napier, New Zealand
Napier, is a coastal city on New Zealand's North Island. It is located in the wine producing region of Hawke’s Bay. The historic district was rebuilt after the 1931 earthquake and fires destroyed the city. It was named a UNESCO World Heritage Site in 2007. Known for art deco landmarks like the zigzag-patterned Daily Telegraph Building. Stroll along the tree-lined waterfront promenade the Marine Parade, and visit the Pania of the Reef statue depicting a Maori maiden, a symbol of the city.

Tauranga, New Zealand
Tauranga is in the Bay of Plenty region on New Zealand's North Island. It is home to incredible surfing, white sand beaches and New Zealand’s only active volcano. Offshore is the active volcano White Island, accessible by helicopter or boat. It is also just a 15-minute drive from one of New Zealand's most popular beach towns, Mount Maunganui. 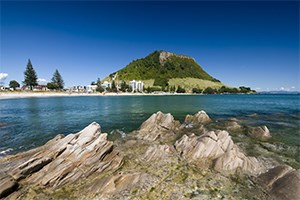 Tauranga is the largest city on the Bay of Plenty and fifth largest in New Zealand. While there visit the world-famous Rotorua, nicknamed Sulfur City, a major Polynesian spa resort town since the late 1800s. In Maori, roto means lake and rua means two, but Rotorua actually comprises 18 lakes—plus an incredible redwood forest.
While there visit the Hobbiton Movie Set and visit to Middle earth and the shire of the Lord of the rings. Then learn traditional customs at the Maori village of Whakarewarewa as you pass by geysers and steaming hot springs.

Wellington, New Zealand
Wellington is located on the southern tip of the North Island. The capital of New Zealand you will find a beautiful waterfront, fresh seafood and unpredictable weather. From Lambton Quay, the iconic red Wellington Cable Car heads to the Wellington Botanic Gardens. High winds through the Cook Strait give it the nickname "Windy Wellington." Wellington is also known for culture and cuisine. The national museum of New Zealand, Te Papa, is fascinating and fun for curious minds of any age. Get a panoramic view of city and harbor, and a great photo opportunity at the Mount Victoria Lookout. You can drive all the way up, or walk through the town belt greenery. The Cable Car is a Wellington icon. It runs from Lambton Quay up to Kelburn, where at the top there’s a lookout, the Cable Car Museum, and Space Place at Carter Observatory. 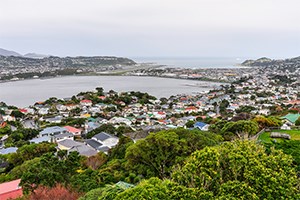 Just a 10-minute drive from downtown Wellington you'll find Zealandia. Hidden in a suburban valley, this project aims to return a 225-acre section of bush to its pre-human state. Take a walk and hear the songs of the flourishing native bird population. Get a behind-the-scenes glimpse into the imagination and artistry behind some of the world's most spectacular movies at the Weta Cave mini-museum. Or visit where the Lord of the Rings was filmed on a location tour. Cuba Street is a bohemian haven, with some of the city’s most colorful shops, bars and cafes. Street entertainers might play percussive guitar, put on a marionette show, or play with fire. Don't forget to get your photo of the one and only Bucket Fountain.