Antarctica is the fifth largest continent in the world and site of the South Pole. Incredibly remote, yet ruggedly beautiful it’s the earths last great wilderness frontier.  A land of extremes, it is the coldest and driest continent on Earth and has the highest elevation.

A cruise to Antarctica offers the opportunity to witness vast natural landscapes, seascapes and wildlife that you cannot see anywhere else. Onboard guest will be joined by naturalists who offer unique insights and presentations throughout the cruise. Guest can get up close to icebergs, wildlife and hard to reach places via kayaks and zodiacs. Teaming with wildlife you’ll see many kinds of penguin species, seals and whales.

There are many ways you can follow in the footsteps of the great explorers who first stepped on this continent, from luxury cruise ships, to expedition ships and icebreakers. 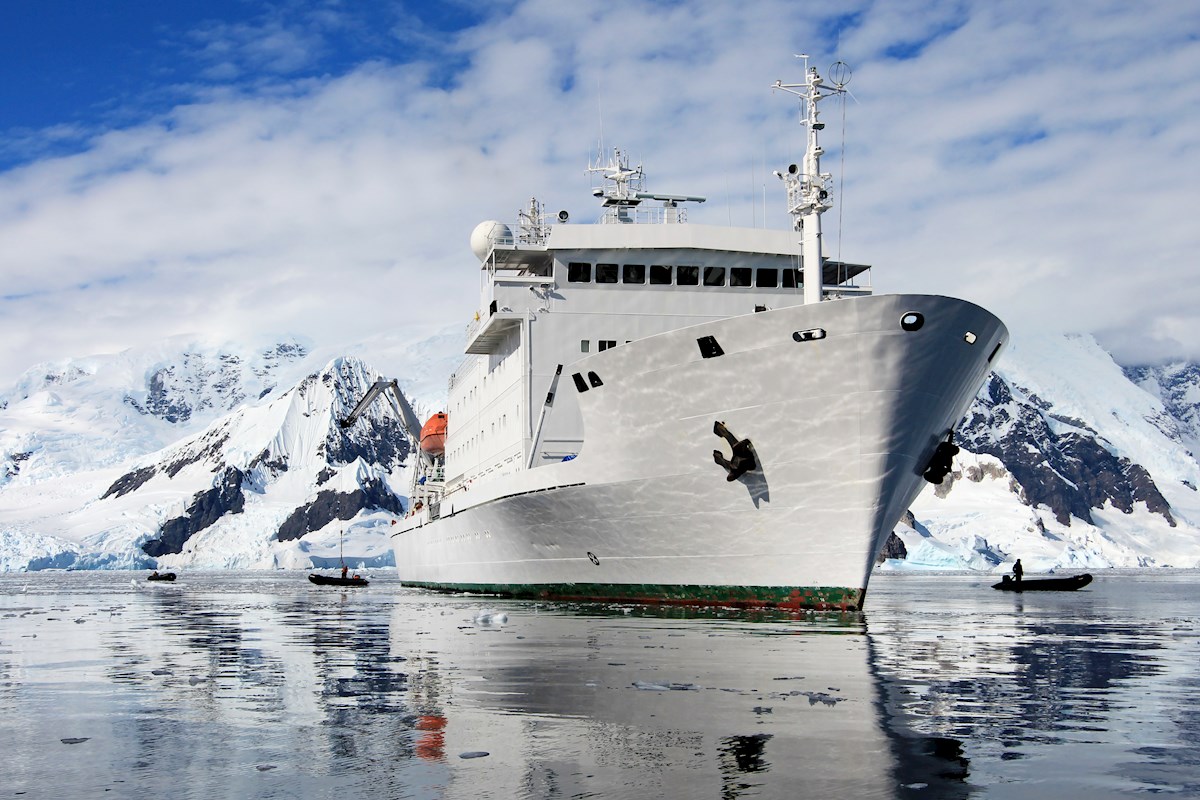 Icebreaker
Icebreakers normally carry no more than 100 passengers. The advantage of an Icebreaker is that it can negotiate through Icy conditions other ships can’t do. These ships offer clean and simple accommodations for guests. The staff aboard these ships are highly experienced in travel to this region. You’ll find naturalists and lecturer’s too. The ships carry zodiacs to bring guests closer to the wildlife and land.  Some provide onboard helicopters that can bring guest further inland.

Luxury Expedition Ships
Luxury cruise ships to Antarctica carry between 75 to 200 passengers. Onboard you’ll find all the amenities of a five-star resort.  Spacious staterooms, gourmet dining and entertainment. Some also have verandas and butler service.

Expedition Ships
Expedition cruising began in 1966 by those looking to preserve and conserve the natural beauty of the continent. The ships are designed to carry small groups of passengers, providing an intimate travel experience.

These ships bring guest close to the beauty of Antarctica while having a minimal impact on the environment.  You will also find a qualified staff, naturalists and lecturers aboard.  These ships also carry zodiacs to take passengers safely a shore.

Travel Notes:
Antarctic cruises are mainly concentrated at ice-free coastal zones over the Antarctic summer, from November to March, at that time guest will find 20 hours of daylight. Only 100 people can land ashore at once in Antarctica.

There are some very strict guidelines that cruise operators must follow, one of which that no more than 100 passengers are to simultaneously land ashore at any one landing site.  This is for the protection of wildlife and the environment.  So, you may have to take turns visiting if you are on a larger ship.

Here are a few of the places that cruise ships travel and visit in and around Antarctica:

South Pole
The South Pole is one of the hardest places to get to in the world.  Accessible via helicopter excursion. You won’t find much there, except for an abandoned Soviet encampment.

Ross Island
Mount Erebus is the highest and most active volcano of Antarctica, one of the Volcanic Seven Summits, and the largest of 4 volcanoes that form the roughly triangular Ross Island. It is famous for its active boiling lava lake. 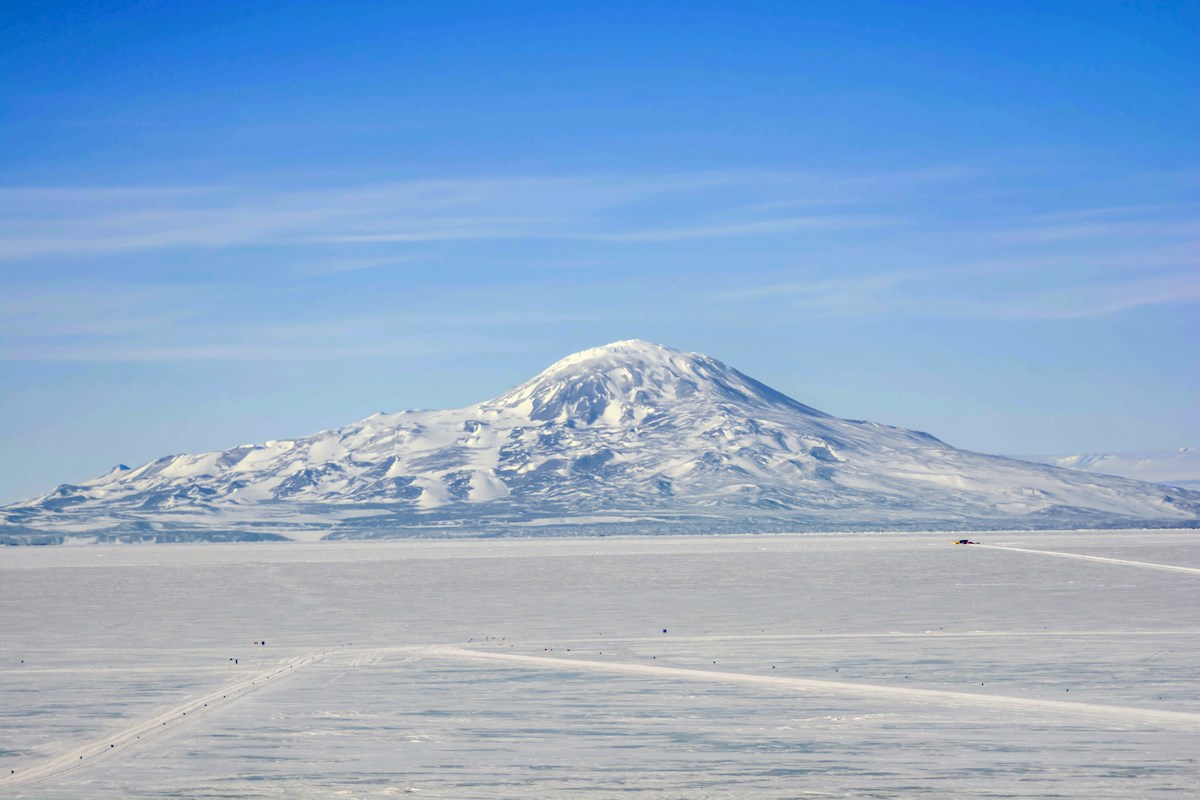 The island is covered by glaciers and was discovered by explorer Caption James Ross in 1841. The Mountain was climbed 1908 by members of Ernest Shackleton's expedition.

Anver Island
Palmer station is located on Anver Island.  The post was built in 1968 on the island’s southwest coast to honor American sealer Nathaniel B Palmer, who in 1820 was one of the first to see Antarctica. The station is resupplied by ship every six weeks.

Researchers here monitor the marine ecosystem, atmospheric studies and the effects of increased ultraviolet radiation and climate change on marine life and land.

Tourists get a walking tour, including visiting two aquariums filled with anemones, mollusks, sea urchins, krill and fish. You may also shop at the station store and taste the locally famous ‘Palmer brownies’ in the dining room.

Port Lockroy
Port Lockroy located in the natural harbor of Wince Island in Antarctica.  Discovered in 1904, the island was once used as a whaling base and later as a British military base. In the 1990s the base was renovated and turned into a museum, Post Office and gift shop. The Post Office is a very popular attraction. It can take as long as 2 weeks for your post card to get delivered, but, it’s cool to have the Antarctica post mark on it. There are also relics from the whaling days at Port Lockroy such as a massive fin whale skeleton. 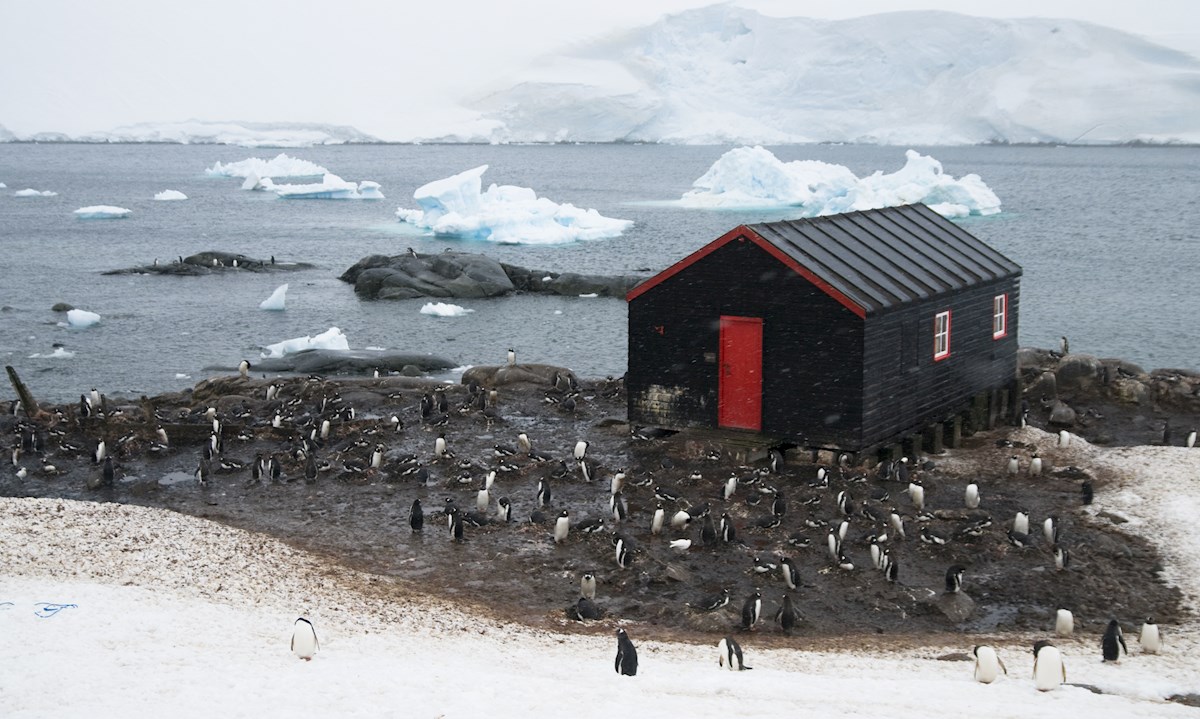 Cuverville Island
Cuverville Island is located at the entrance of Errera Channel. The island is home to over six thousand pairs of Gentoo Penguins composing the largest rookery on the Antarctic Peninsula.  The Island is also home to several species of Antarctic seal, as well as an array of Antarctic birds, notably shags and Southern Giant petrels. The calm waters around the island make it a popular place to explore on a zodiac. A fantastic way to see Minke whales and icebergs up close.

Paradise Bay
Paradise Bay is one of Antarctica's most visited areas.  Flanked by glaciers and mountains that reflect in the water this is truly paradise! While exploring in a zodiac you can see seals, penguins and sometimes even whales.

Hope Bay
They call Hope Bay, Iceberg Alley.  Located in the Antarctic Sound hundreds of icebergs of various shapes, hues and sizes can be seen. A truly inspiring experience. Visitors here will find the remains of a stone expedition hut from a Swedish Antarctic Expedition that wintered there in 1903.  Also, an Argentinean base were the first child born in Antarctica was delivered.

Neko Harbor
Neko Harbor is an inlet of the Antarctic Peninsula on Andvord Bay, situated on the west coast of Graham Land. Neko Harbor was discovered by Belgian explorer Adrien de Gerlache during the early 20th century. In the shadows of a giant glacier, Neko Harbor is home to over 200 breeding pairs of Gentoo penguins. Weddell seals can also be seen stretched out on the beach. 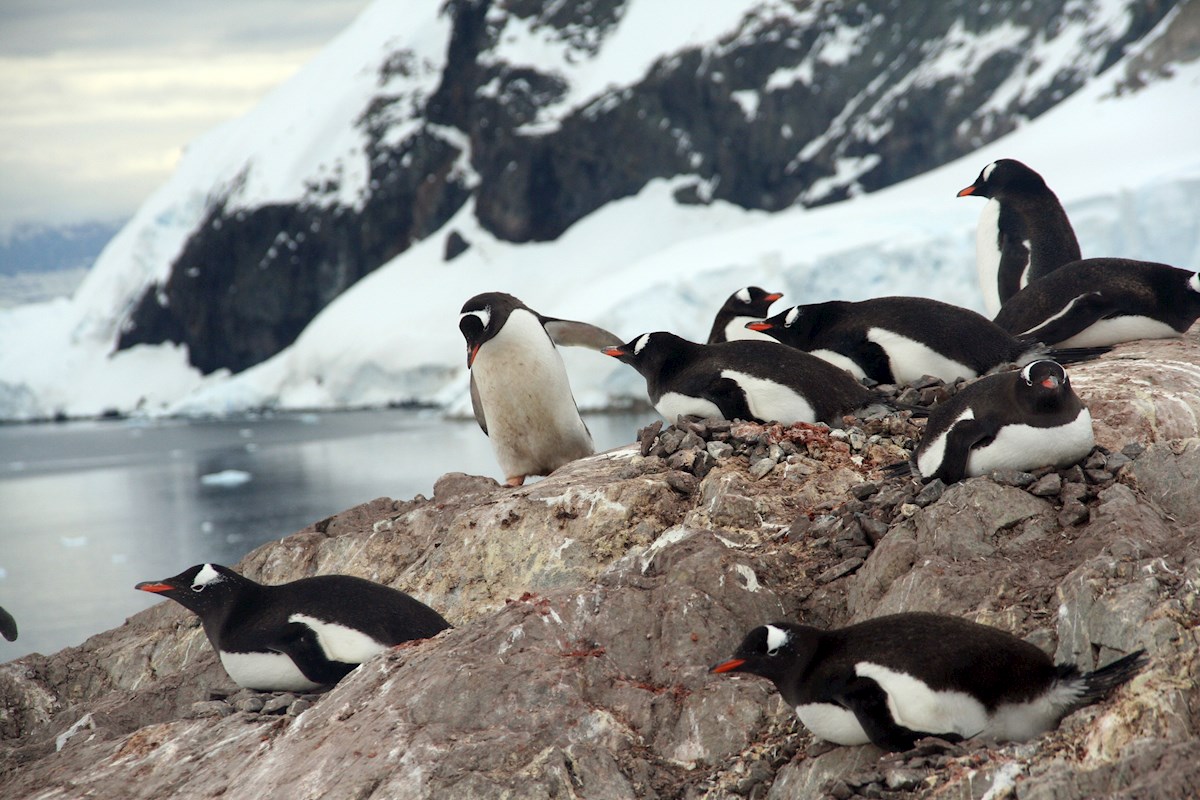 Deception Island
Deception Island had one of the safest harbors in Antarctica. The island is the caldera of a still active volcano. Steam rises above the icy ocean waters here making it a place where brave folks have been known to climb in and take a swim! A haven for sailors the island offers safe refuge from storms and icebergs.  Today, cruisers hike around the abandoned village that once housed a Norwegian whaling company.

Antarctic Peninsula
Located in the Southern Hemisphere, The Antarctic Peninsula provides a beautiful backdrop for scenic cruising. Wildlife, Icebergs, glaciers, steep ice shelves and frosty mountain peaks can be seen from the deck of your ship. Although the peninsula is covered in ice, it has the mildest climate in Antarctica allowing flowering plants to grow freely!

St. Andrews Bay
Two hundred thousand king penguins can be found at Andrews Bay on South Georgia Island. The bay is also home to over 6 thousand elephant seals too.

Drake Passage
Named after Sir Francis Drake, Drake Passage lies between the southern tip of South America and the South Shetland Island connecting the Atlantic and Pacific Ocean. Rough seas and fierce Storms are not uncommon here causing some guest to report nausea on their way to Antarctica.

South Shetland Islands
The South Shetland Islands are about 75 miles north of the Antarctic Peninsula and is home to several national research bases including: Chile’s Frei Station, Russia’s Bellingshausen Station, Peru’s Machu Picchu Research Station and air strip provides more than 200 flights a year. Explorers have been visiting the islands since at least the 17th century, due to its strategic location close to the Antarctica Peninsula. 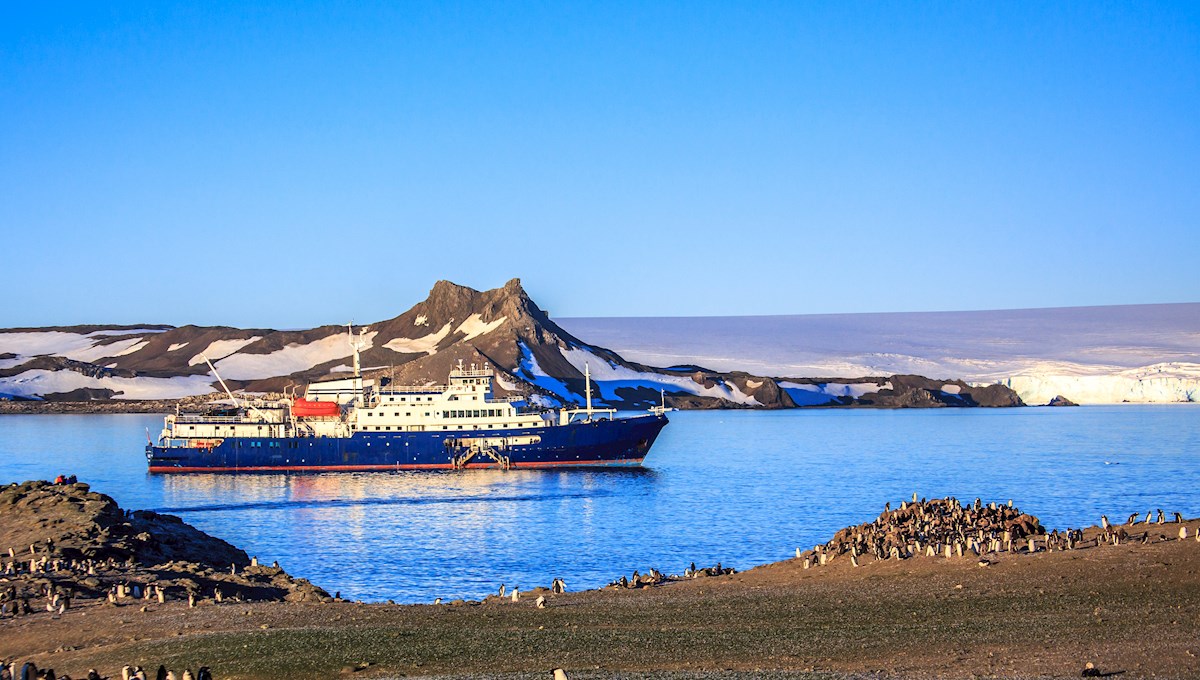